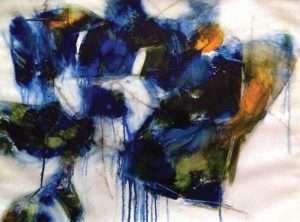 Don Lisy was born and raised in Cleveland, Ohio and creates his art as if revolting against the Midwest sensibilities that dominate the critical and popular mind sets of his hometown. Don attended the Cleveland Institute of Art where he studied Printmaking and Painting. Don’s work has been compared to the New York school of action painters however, Don’s work is not derivative from any one school. Each of Don’s works are created in one session. By immediately succumbing to the emotional energy that inspires his work, Don feels he is best able to represent that emotion if he can complete the work before the feeling dissipates. Each resulting work is more of a self portrait of an emotional event rather than an image concerned with aesthetics.

Don’s first visit to New York City was in December 1993. Over the years he often returned to NYC for group exhibitions and also performances with his band. It was during a visit in 2001 that Don connected with New York on a new level which planted the seed that one day he must live there. In the spring of 2010, Don left family and friends in Cleveland and made the permanent move to Brooklyn where he continues to dedicate himself to his own personal artistic vision. In December 2016, after an over decade long absence, Don re-established a studio in Cleveland. Don’s work has been exhibited across the United States and internationally in Germany, Italy and Spain. Don Lisy is represented by Zhang Gallery and Gallery 104.