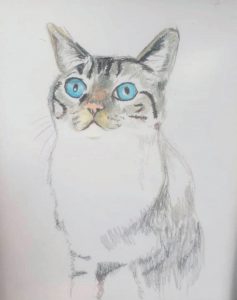 “…chasing songbirds; and has earned the well deserved titles of ‘Zimmykins,’ ‘The Best Cat,’ and ‘The Great Hunter…”

Kelly Lockwood was born near Sacramento, California in late 1993. Kelly moved to Texas in May of 2015, but became an official Texan in late 2017/early 2018. Kelly has had solo shows on all the coasts, and occasionally pops up doing solo and group shows around Texas and surrounding states. Sometimes she appears in international shows, Kelly likes minerals, fossils, and cats. If you approach her on any of those subjects, get ready for at least 10 minutes of photos and a conversation on those subjects.

Kelly has two cats, a 20 lb bengal and a small tortoiseshell princess, and comes from a family of four people and six cats.