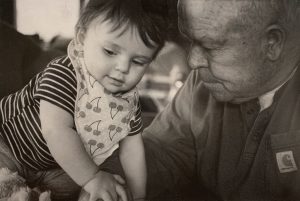 “You tell me” he says
the order we fight for
we live for
(and get distracted from)
we die for
(and do what exactly?)
let’s admit the details are hazy on that one no matter who you are
and isn’t that astonishing?
Einstein had as much clarity on what happens after your last taco as Tom had on how to catch Jerry.

We do love,
and that is something that seems important even when you zoom out beyond the point where no details are discernible.

And yet here we are
singing each to each
our own little bubble in a spray of foam
on a sea of expanding expansion
and that
sounds darker than I mean it to be
it is certainly an energetic thing for the universe to be doing and you ought to give it credit for not just sitting around doing nothing.

Something moves between those points faster than light
and I admit I dream sometimes when you sleep,
and sleep sometimes where you dream.

I’m beginning to see myself as some kind of point on a line between points
an event, let’s say, in a longer narrative
a collective thought experiment—
my father a fixed point at the moment of my birth and then a parallel line that shaped me from a squiggle to a bold stroke
and now tapering off…
my son a time-traveling arrow — off to a future I can’t imagine
and each a poetic and geometric echo or foreshadow of the other

3 generations
so alike
father, son
and the singular “I” behind the camera
drawing lines that intersect only in that space we carelessly refer to in that little three-letter word
as if it were a neighborhood name on a google map in a destination city
visit beautiful art, visit historic downtown art
it’s a sea we don’t know how to cross, but sometimes we take spectacular swims in
it’s a language we don’t know how to read, but we sure can stack up the letters into impressive piles.

We think our own thoughts
except, of course, when we are thinking the same thing
We move in our own directions in space and time
Of course, we do rub our feet together in exactly the same way when we’re tired.

I wonder how far back we could trace that line, 10 generations? A hundred?
Do I have an ancestor who rubbed his feet together the same way 2,000 years ago?
Would he look and recognize me if he could see that far down the line?
Did he think about me looking back?
No. We look back further than we see forward.
But still, would he recognize his own echoes in the way I sing, the way I see, the way I stand?

As a kid I feared climbing stairs with open backs
thank you consciousness
for glossing over the empty bits and telling us all such a great story
I can wait to see how it ends.